On April 11th 2015 the New Mexico Food and Seed Sovereignty Alliance hosted their 10th annual seed exchange at the Peñasco community center in Northern New Mexico. Indigenous peoples from all four directions came to participate in this ceremony; one of the most sacred, inter-tribal, and linguistically diverse exchanges that happens in the state. Within my family there has been a long tradition of the women being the protector of our native seeds, these corn mothers have planted, harvested, and cultivated strong plants and babies who carried on these land based traditions.
The native people in New Mexico have lived in harmony with the water, land, and seeds for centuries and are some of the best environmentalists, nutritionists, and doctors of the Southwest. Only now has conservation and environmental justice become a trend that activists find convincing and worth aligning themselves with after learning the brutalities that capitalism has on our mother earth, bodies, and society. However, this exchange is a unique and sacred gathering despite the tensions, histories, and wounds between community and the impact that relocation, displacement, and genocide has had on the people; they come together in a powerful act of survival, a seed exchange.

Being born and raised within a land based community I have learned the values of respect, preservation, and sharing. Not to mention that being a woman in this generation it is my spiritual and cultural obligation to protect our sacred traditions, seeds, and continue the fight for water, sacred sites, and stand against GMO's. Participating in this ceremony with my mother, father, and brothers and sisters of all ethnicities revealed some of the most powerful characteristics and tools that our people inherited and practice.
When the seed ceremony began, an opening prayer was recited for our departed farmers, acequieros and community members by Los Hermanos Penitentes from La Conformdia de la Santisima Trinidad, La Morada de Nuestro Señor de Esquipula, and La Morada de Santa Cruz de la Cañada. In an old Castilian Spanish, the Hermanos welcomed the spirits of our dearly departed into the circle while also praying to the patron saint of agriculture, San Ysidro. In this prayer, I could hear my father's Chicano accent turn his tongue like a shovel turning moist earth. The brothers sang in harmony and welcomed the medicine women to call forward the four land and water offerings. Girls and boys not over the age of ten filled the clay vessel with water and the woven basket with earth uniting the essential elements that our peoples from the four directions worship and rely on for sustenance.
Afterwards, the farmers who brought seeds lined up to make their offering. Each seed-saver had a sampling of their seeds in a basket, which they blessed and mixed with all the elements to create seed balls for the people to take home and plant in their gardens. While I stood in line to offer the seeds from my family it was beautiful to hear the chatting of many tongues like the sounds of rare birds in a secluded corner of the world. In seconds, I watched as people code-switched and spoke three different languages when greeting one another in the seed line. This trilingual community is like spotted corn representing the diversity and mixture of a beautiful, sustainable, and thriving people.

Next, the Santa Clara Pueblo buffalo dancers blessed the offerings with a rain dance as the elders beat the drum and sang the songs that had been passed down to them. There dance was so beautiful including their dress that it even brought tears to my mother's eyes who was sitting in the inside of the circle. Lastly, the Azteca-Chichimeca danzantes blessed the farmers and new seeds outside of the community center. With their feet in the dirt and the sun on their shoulders they danced to another rhythm that all farmers and spiritual leaders watched and respected.

This gathering is a powerful testimony of how indigenous communities can come together despite language, cultural beliefs, and contested histories. Not to mention that these spiritual ties have been made with such profound love and respect that the people formed the NM Food & Seed Sovereignty Alliance in which farmers from tribal and acequia governing communities come together to defend seeds from genetic contamination in order to build an intergenerational coalition and healthy intertribal family for the future farming in New Mexico. With this coalition came the annual gathering in three languages, beginning with Tewa/Tiwa, recognized indigenous peoples as seed savers and guardians of countless generations of seeds. The Indo-Hispano people, who are mestizo, or of mixed ancestry, have evolved a land-based culture after centuries of growing food in their respective villages. Later, other migrants established roots and continued or revived seed saving traditions of their ancestors as well. The seed exchange and gathering is an affirmation of the unity that is possible between cultures and the unity that is necessary to defend seeds so that future generations can continue their freedom to save seed and grow their own food. 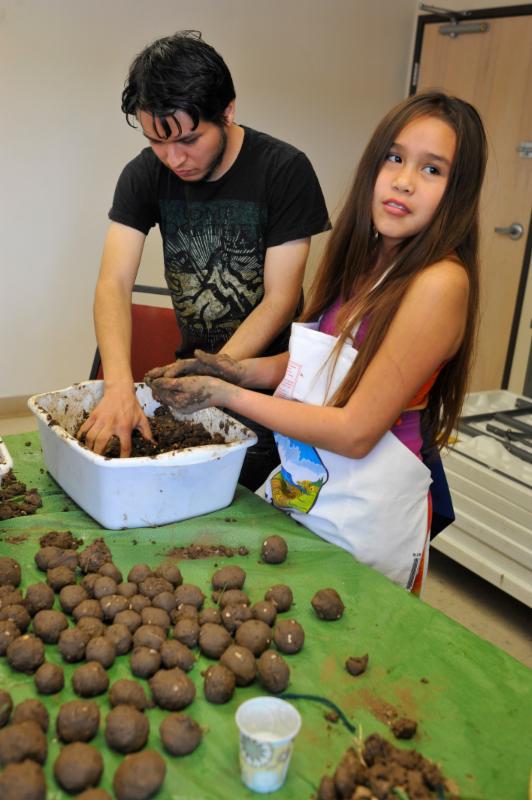