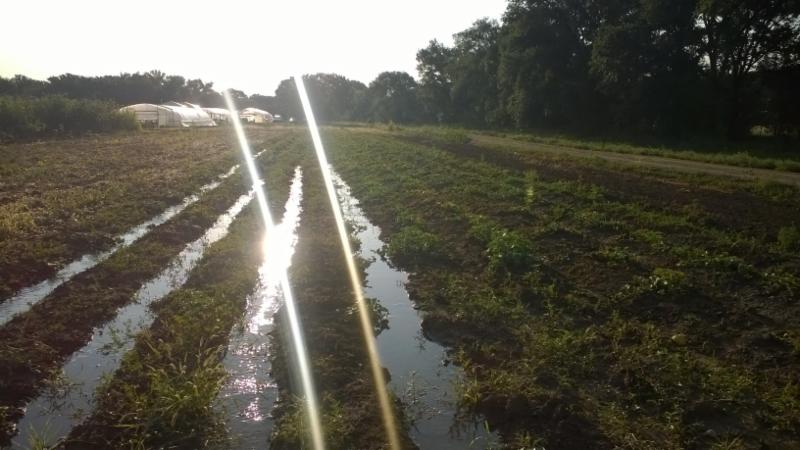 Cultural landscapes illustrate the links between people and the physical environment in which they live. Throughout the world humans have developed a relationship with their surrounding natural environment and the acequia system is a great example of a multifaceted social and physical structure that integrates nature, people, and place that together achieve a sustainable model that clearly demonstrates resilience.
In recent years, we've established a greater understanding of this resilience, from a research perspective, about how and why acequias have maintained resilient while they're challenged with changing economic structures, climate change, a flawed food system, and others. For the past several years, the New Mexico Acequia Association has partnered with researchers at NMSU and UNM for a multidisciplinary project that seeks to understand the resilience embodied by New Mexico's acequias. Recently Dr. Sam Fernald, who has been engaged in acequia hydrology research since around 2001, spoke at NMAA's annual Congreso de las Acequias membership meeting in November, where he presented years of collected data that essentially supported the claims made by acequia advocates who have long proclaimed the benefits of acequias.
The hydrological cycle is a term that most of us are familiar with. But what about the concept of a "hydrosocial cycle"? Acequias are at the outlets of snowmelt basins and as irrigation ditches, they divert water from a river and use gravity flow to deliver water to agricultural fields. When acequias were being established, the variations in local topography dictated the uniqueness of each acequia – the course of the acequia conformed to local and natural geographies in the landscape. Acequias also make up a social structure in which the irrigation water is locally managed by the community according to their bylaws. When we combine the physical attributes of a ditch with its related social arrangement we have what researchers are referring to as a hydrosocial cycle. It's a social system that implanted itself into the hydrological cycle for community subsistence. An acequia's link to its bounding watershed inherently tasks the system to be sustainable. For example, less snowpack results in less run-off which means there will less water for irrigation. During drought periods, for generations acequia irrigators have collectively withstood water shortages which has helped to shape the sustainable nature of acequias. The repartimiento concept of water sharing developed into a collection of customary practices that are rooted in the knowledge of the land, watershed, and a varying water supply.
In Dr. Fernald's summary of the research highlights, he asserted that "acequias actually create the conditions for their own self perpetuation," referring to their ability to adapt to changes in climate, economic structures, and other influences. Additionally, acequias provide many hydrologic and ecologic benefits. Acequia leaders and advocates throughout the state have long known about these benefits, but now they have objective research to support their claims. In his early studies, Dr. Fernald focused mainly on acequia hydrology using Alcalde as a study site where he found that only between 7.4% and 15% of diverted water is actually consumptively depleted and sent back to the atmosphere. About 33% seeps into the groundwater and flows back to the river while the remaining portion moves through the ditch and goes back to the river as surface water. Additionally, the researchers looked down past the rooting zone of crops and found a response to irrigation seepage – acequia flood irrigation actually recharges the aquifer as the irrigated valley acts as a sponge, retaining the excess water that's not utilized by crops. What does this mean? For one, flood irrigation is not the water hogging villain that many water conservation advocates proclaim. Rather it actually conserves water because it acts as an underground reservoir that holds water upstream for longer periods of time.
Since the Acequia de Alcalde diverts water from the Rio Grande, the ongoing research expanded studies into different sites including El Rito which is a very dry system; and acequias along the Rio Hondo near Taos, with conditions somewhere in between. In addition to hydrologic contributions, acequias are also beneficial to the ecology. Species biodiversity is maintained when acequias distribute water through the valley landscape, supporting the riparian vegetation that provides wildlife habitat.
Drought is major stressors for acequias. Other than the obvious reduced water for crops, it also results in reduced herds, which is a negative impact on acequia systems because of the close connection between the valley and the upland; yet they persist. Dr. Fernald's research argues that the core of acequia resiliency is in the ability to adapt to change, even when hit with stresses from land use, economics, and climate. From a sociocultural view, the study also found that if you have retain ownership you inherently possess certain family values, local knowledge, and strong ties to cultural traditions that help to mitigate certain impacts to maintain the system.
Looking ahead, the current research tells us that we'll face a reduced water supply. Tree ring data shows that in the past acequias faced very dry periods that lasted between 75 and 150 years. It's probably part wisdom and part geographic luck that acequias were established in their physical landscape, but regardless the end result is still the same: acequias are a sustainable water management system that is well-suited to adapt to surrounding and internal changes.