Skip to content
The New Mexico Acequia Association is pleased to announce another successful statewide Acequia Conference that happened on June 16th 2016 at the Santa Fe Community College. This year we focused on the importance of Organizing to Protect Acequias by highlighting some of the proactive ways that acequia leaders are making impacts and positive change in their community. We want to personally thank and celebrate all of you for making the time and effort to be there and for bringing the knowledge back to your communities. 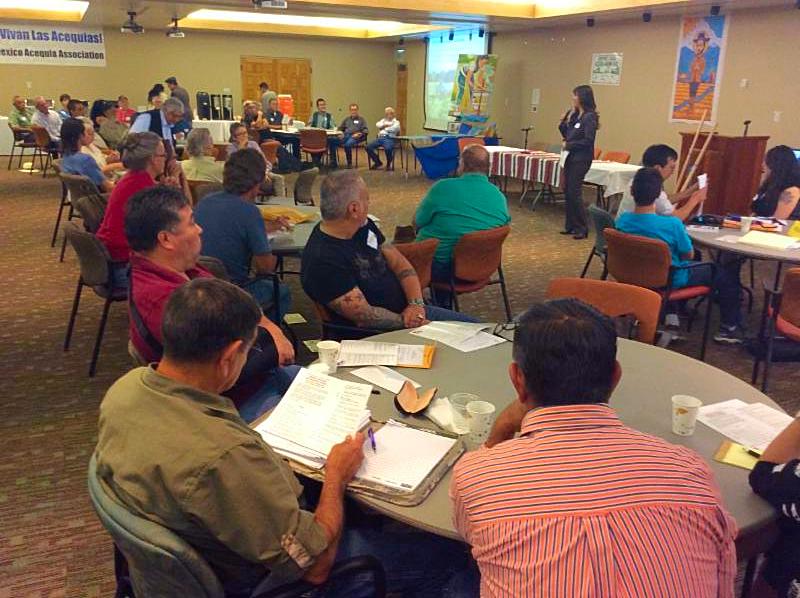 For the morning panel we had 5 leaders from various acequias speak on behalf of the organizing strategies and techniques they are using to help protect their water rights. 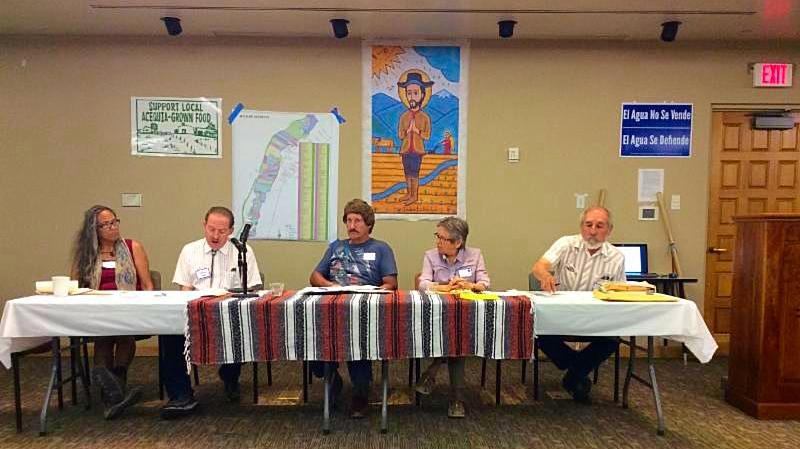 Sylvia Rodriquez, Taos Valley Acequia Association board member spoke to the cultivation of new leadership and reinventing the TVAA while honoring the strenuous work done under the Abeyta settlement. The Taos Valley Acequia Association Leadership & Education Committee formed to aid in educating, informing, advising and assisting Acequias regarding protection and defense of water rights. Equally important are efforts to involving more youth, reviewing TVAA bylaws and articles of incorporation, conduct board trainings, and re-discover the purpose and future of TVAA after the settlement is finalized.

Alfredo Montoya, President of Las Nueve Acequias del Rio Grande, gave an awakeningspeech to commissioners regarding how acequias who have not been adjudicated need to engage in pre-adjudication organizing. He focused on the importance of declaring all parciante water rights and water banking to reduce the potential claims of abandonment from the state or other entities that water in acequia communities is undocumented. "We do not know when the adjudication will come but we have learned from our fellow brothers and sisters that it is not a pleasant experience nor is it a win, win" Alfredo shared.

William Mee, president of the Agua Fria Acequia Association spoke with devotion on behalf of the rest of the acequias surviving in the city of Santa Fe after being strangled from encroaching development and historical annexation. The acequia communities challenged the city and created a historical movement that rekindled all the traditional and spiritual events like Los Pastores, Las Posadas, and Dia de San Yisidro.William exclaimed proudly, "we use prayer and tradition as a way to respond and combat these urban issues and litigation!"
Camilia Trujillo, of La Cosecha del Norte Farmers Cooperative exposed leadership to the successful model of organizing a coop to sell acequia grow produce in an effective and marketable way that not only supports the farmers but feeds children in schools, is sold at grocery stores, and in her own words, "increases food security for our communities while protecting the agriculture use of land for future generations". La Cosecha del Norte will soon be creating their own website, branding, and packaging!

Gilbert Sandoval, of the Jemez River Basin Coalition of Acequias advised leadership on how to use the regional association as a fiscal agent for applying for funds either in adjudication or for infrastructure projects and repairs for a community. Gilbert recalls on the past, "Our first focus was raising funds for a legal defense in the adjudication. However, as a regional association
we have been able to submit claims from all the acequias for infrastructure projects. We as board of directors then review the plan, money and distribute them to the acequias by priority of project and according to their needs. This last fiscal year they received $40,000 for the regional." Not only has Gilbert navigated funding for all the acequias through the regional he survived 2 audits from the Office of the State Auditor. Gilbert Concluded by saying, "It's a lot of work but it is very awarding!" 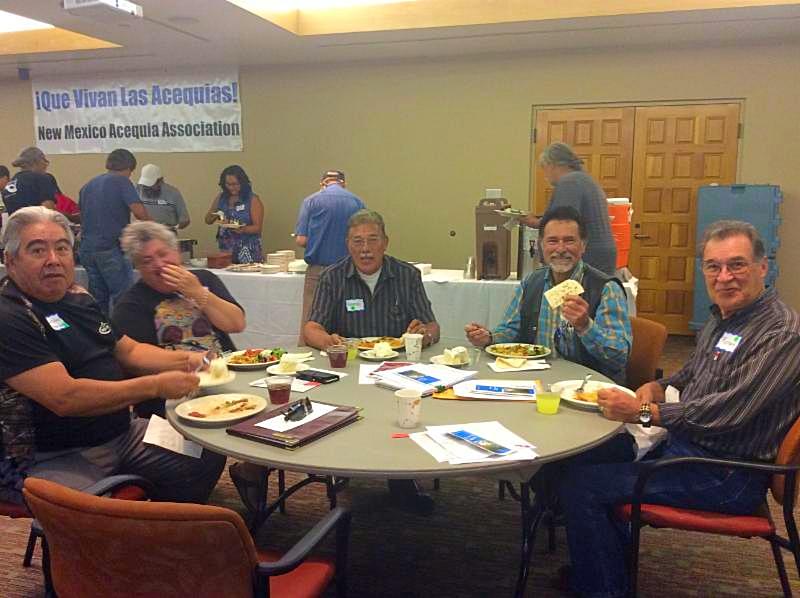 We had a delicious lunch and exciting entertainment. We got to meet with old friends over lunch and clapped along to music performed by David Garcia and Jeremiah Martinez who also sang Las Mananitas to the admired and sought after attorney, Enrique Romero. We all later broke into groups to discuss and engage with one another about the challenges, triumphs, and advice that can be given amongst acequia leaders. It was an exciting time for commissioners as they learned from one another's different approaches, techniques, and ways of managing or dealing with modern problems facing our traditional ways of life. This networking, exchange, and platicas were fruitful and resulted in the development of questions that were presented to Enrique Romero an attorney with NM Legal Aid. 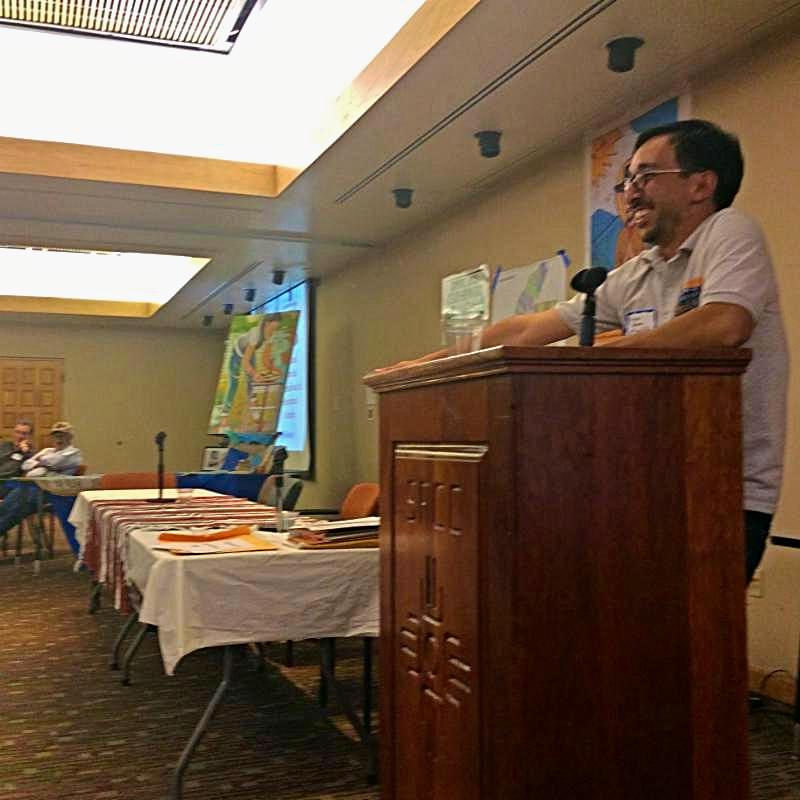 That afternoon, Enrique approached the podium and responded to legal questions of the group in order to help guide and advise leaders how to handle various situations on their acequias and prevent lawsuits. Ultimately, the legal session helped acequieros/as better understand the powers and regulations acequias have being local governments.

This year we were also proud to include youth presentations at the conference. We are ever vigilant of the fact that acequia leadership and agriculture is something that has to be nurtured and passed on to the next generation in an intentional way. Youth from Mora and Abiquiu briefly presented on the work they are doing as part of our Sembrando Semillas Network, keeping acequia traditions and values alive! The youth also conducted short interviews with participants about the visions for their acequias. Our youth, our future!
It was a beautiful day together and we are grateful for those who traveled and sacrificed time in their fields to be with us. In the meantime, keep calling when questions arise, or when you are in need of assistance and support.