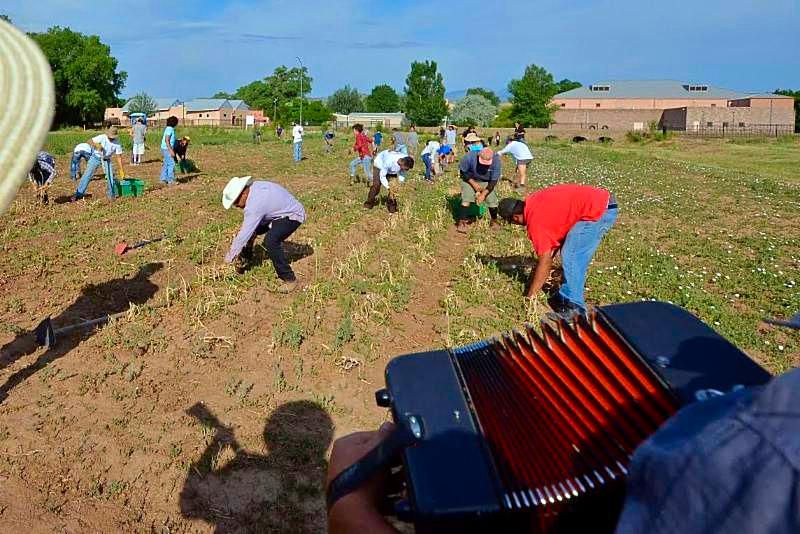 The air was fresh and the early morning dew had not yet been burned off by the sun on Saturday June 25th, when the first wave of farmers, community members, and garlic-lovers came out to the 9thannual Sostenga Garlic Harvest Festival in Española bright and early at 7am to pick garlic. The festival is an incredible community event co-hosted by American Friends Service Committee (AFSC) and Northern New Mexico College (NNMC). The day started with a blessing followed by words of encouragement from emcee Roberto Mondragon. The rules for the garlic-picking contest were laid out: 5 members to a team, only shovels and hoes allowed as tools, all garlic must be cleaned before weighing. The garlic contest is serious business with cash prizes totaling $600 for the top three teams that pick the most garlic! Surely the cash prizes are an incentive, but the real motivating factor behind the garlic fest is to draw the community out early on a Saturday morning to eat, work, laugh and play together, as we honor the agricultural traditions that are the backbone of our culture.
This year there were eight teams who signed up for the picking contest, and they harvested over 800 lbs of garlic in less than 45 minutes- a new record! David Garcia and Jeremiah Martinez sang Las Mañanitas and other songs to the garlic pickers to keep the animo up. As the contestants stepped off the field, there were fresh blue corn pancakes (made from the corn grown there), bacon, juice, coffee, and fruit for everyone to share. The crowds streamed in and the planning staff and dedicated volunteers fed over 200 people all morning long. 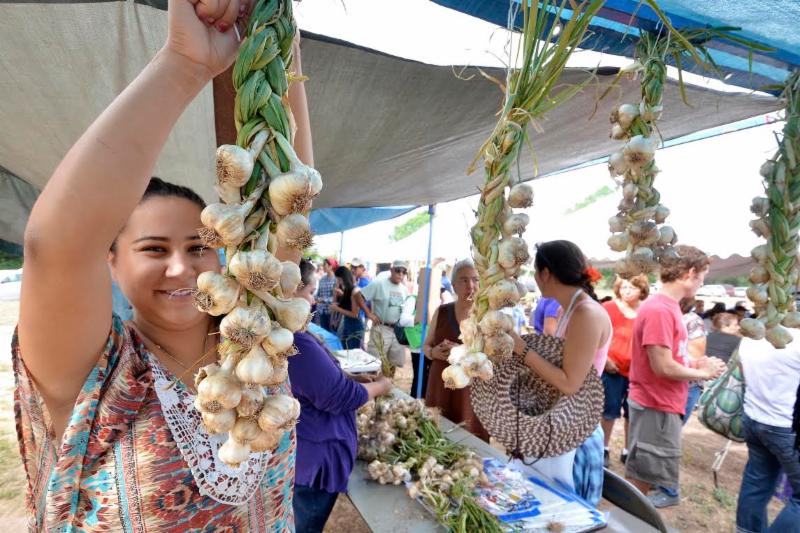 Several booths with hands on activities and information were set up, including a print making booth. The NMAA hosted a Comadres de las Acequias booth in which Juliet Garcia-Gonzales taught how to braid garlic. We braided garlic for hours with participants and dished over what remedios are in season, how our gardens are doing, what the kids are up to, and more.
As the morning heated up, we played kid's activities. Dozens of kids took their swing at a garlic-shaped piñata. And when it got really hot, a friendly water balloon fight was started to keep cool!
Meanwhile the music kept the energy going. Roberto Mondragon y su Trio blessed us with their rendering of classic Nuevo Mexicano tunes. Ana X Gutierrez-Sisneros sang the blues while Tim Martinez made the guitar cry. The Imperial Rooster, a feisty local band from Española, had everyone rocking out to their unique sound of porch-swing punk rock.
All of this led up to the culminating moment when the winners of the garlic picking contest were announced, as well as the crowning of this year's Rey y Reina de Ajo. The first prize went to a group of young men from Chimayo, Española and Truchas. Congratulations to all the winners! Finally, La Reina y El Rey de Ajo were crowned. This special award goes to a man and a woman each year who demonstrate commitment to working the land and giving back to the community. This year Donne Gonzales and Noberto "Bobo" Armijo, both of Chamisal, were crowned Queen and King of Garlic. Bobo and Donne are the co-managers at the AFSC-Sostenga Farm. They are long time participants of NMAA's Sembrando Semillas program and have recently taken leadership in AFSC's farmer training program. The training program is located at AFSC-Sostenga Farm in partnership with NNMC for the past 5 years. 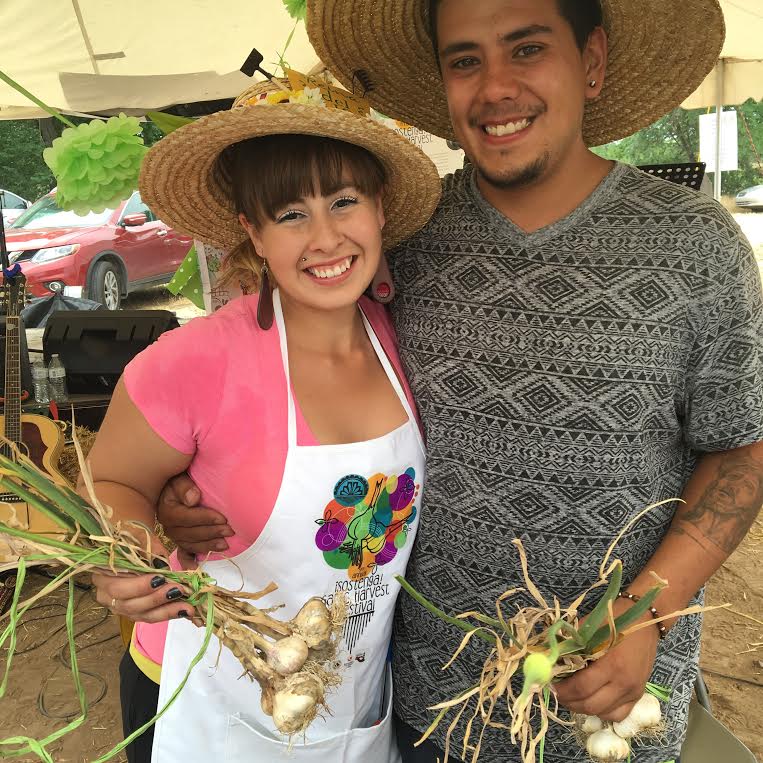 NMAA is honored to have taken part in the Garlic Fest this year as part of the planning committee and would like to take this opportunity to thank the long-time organizers of this special event. Thank you: Dr. Patricia Trujillo and Ana X Gutierrez-Sisneros of NNMC; Sayrah Namaste, Don Bustos, Patrick Jaramillo, and Maria Brazil of AFSC. And a special thanks to the farmers and farm trainees who grew and tended the garlic: Donne Gonzales, Bobo Armijo, Manuel Sanchez, Andres Juarez, and Drew Perez.
iQue Viva el Ajo! See you there next year!!