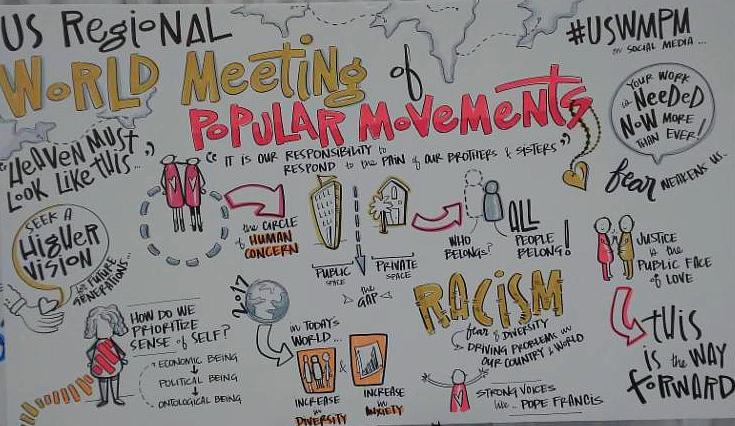 By María Gallegos, NMAA Staff
On February 16-19, 2017, on behalf of NMAA, I traveled to Modesto, California with other members of the New Mexico Delegation and joined over 600 grassroots community leaders, organizers, clergy and bishops at the 2017 World Meeting of Popular Movements U.S. Regional Meeting.   This regional meeting of U.S. based social justice organizations was an offshoot of three World Meetings of Popular Movements (WMPM), which took place in Rome (October and November 2016) and Bolivia (July 2015.) The WMPM is an initiative of Pope Francis to develop bonds of collaboration among people across the world who are struggling to attain what every person deserves for dignified living- the basic rights to Tierra, Trabajo y Techo (Land, Work and Housing.)

In his keynote address, Cardinal Peter K.A. Turkson, Prefect of the Dicastery for the Promotion of Integral Human Development, read a personal letter from Pope Francis which set the context of the meeting. The Pope alluded to social justice work and the bridges that need to be built to overcome the walls of exclusion, indifference, racism and intolerance. The themes of the meeting were Racism, Migration, Work & Housing, and Land & the Environment. Through many hours of hard work and tough conversations in small group we created a summary document with a set of recommendations to be sent to the U.S. Conference of Catholic Bishops and Pope Francis.

I did get an opportunity to have a brief conversation with Cardinal Turkson, before he gave mass at St. Stanislaus Catholic Church, about our work at NMAA and in New Mexico to protect our water, land and people. It was an honor to represent NMAA in this important worldwide meeting and definitely a once in a lifetime experience to attend this special mass with leaders from a diverse sector of faiths.

The road from Modesto to Sacramento is lined with hundreds of miles of farms. Almond and walnut trees in bloom, miles of vine yards pruned into geometric patterns that make you dizzy as you peer out of the window of the bus. The road also holds the footprints of the People who marched with Cesar Chavez and the United Farm Workers in the '60's. If you close your eyes and listen, the wind carries their songs and prayers. I did not make the 340 mile trek on foot but how could I not take a moment to honor this history- to join the spirits of the people who believed in the plight of the workers' human dignity and rights? I asked a United Farm Worker compadre to take me to the road to walk a bit so that I may leave my footprints in solidarity with the memory of those who walked before me and my commitment to walk with those in the quest for Tierra, Trabajo y Techo.

To read the Message of the Holiness by Pope Francis Follow:
http://w2.vatican.va/content/francesco/en/messages/pont-messages/2017/documents/papa-francesco_20170210_movimenti-popolari-modesto.html

To learn more about the World Meeting of Popular Movements:
http://popularmovements.org/