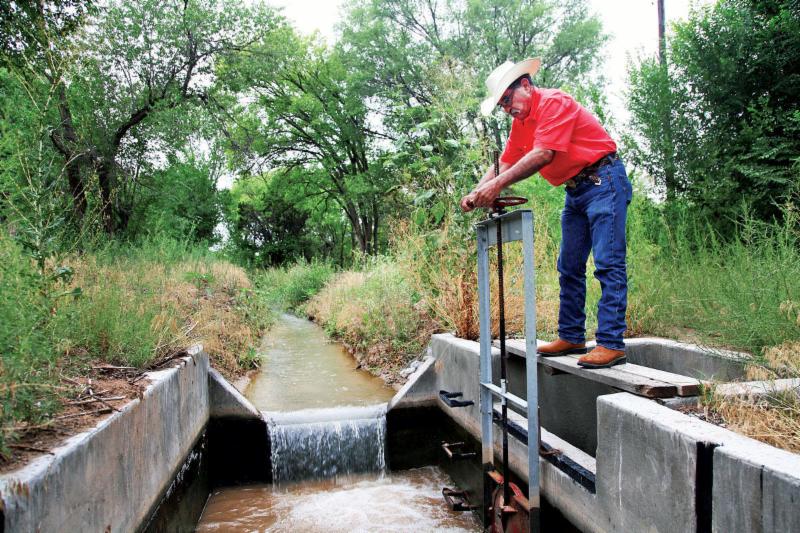 Edward Romero, mayordomo of the Acequia de las Jollas, opens the sluice gate to release water back into the stream -Photo taken by Gabriela Campos

The State Engineer has issued proposed rules governing the Nambé-Pojoaque-Tesuque (NPT) Water Master District. The proposed rules ("Rules") define how water rights will be administered or managed by the State Engineer in the NPT basin. There are hundreds of active acequia parciantes in the NPT Basin and the implementation of these Rules will have an impact on the governance of acequias and the future health of acequias. A public hearing will be held on Wednesday, August 16. See below for details. http://www.ose.state.nm.us/AWRM/RulesRegs.php

On August 10, the NMAA held a workshop in Nambe to discuss the key provisions of the Aamodt Settlement ("Settlement") and the proposed Rules, how those provisions may impact NPT acequias, and to prepare parciantes for the public hearing on August 16. The workshop was well-attended, with nearly 60 acequia parciantes – including many acequia officers. A reporter from the Santa Fe New Mexican was also present and an article about the workshop and the proposed Rules was published in the Sunday paper. Click on this link to read the article. http://www.santafenewmexican.com/news/local_news/fears-of-being-left-high-and-dry/article_21d1dc81-e372-5c49-930e-9545a3a18159.html

The large turnout and the active participation of attendees shows there is a real interest in understanding the implications of the Settlement on NPT acequias. NMAA summarized "Section 4 protection", or the protection provided for in the Settlement to surface water users during certain priority enforcement when senior users may request junior users to curtail water use. The loss of Section 4 protection after five years of continuous non-use will impact acequia diversion rates especially during times of shortage. Other topics discussed at the workshop included annual mayordomo reporting of "to be irrigated" lands and the effectiveness of water banking post-adjudication and post-Settlement.

The hearing will be held at the Old Senate Chambers, Bataan Building, 400 Don Gaspar Ave in Santa Fe, beginning at 2 p.m.

As people affected by these proposed rules, acequia parciantes and officers should appear and testify. Written comments may be submitted at the public hearing, or by e-mail to felicity.strachan@state.nm.us until 5:00 pm on August 16, 2017