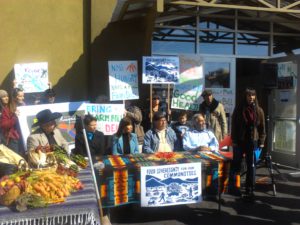 In 2013 NMAA hosted a rally to encourage the passage of a new Farm Bill. Photo: Serafina Lombardi

When I think of the New Mexico Acequia Association and its influence on the state as a whole, I think about the long arc of New Mexico history and the fact that NMAA was formed at a point when there was a historic need for acequias to gain back some of the sense of self-determination they had before modern times.

When New Mexico became a state in 1912, acequias were one of its strongest institutions.  Elephant Butte reservoir did not yet exist, nor did the Middle Rio Grande Conservancy District (MRGCD), nor most of the larger scale agricultural districts.  Those areas were all primarily acequia agriculture, which was the backbone of agriculture in the state. As such, a great deal of deference was given to the authority that acequias had over their water rights, their easement rights, and their locally unique systems of water allocation.  Any water law or policy that acequias would have felt they needed for their own defense they probably could have easily passed in the Legislature. No one at that time could have imagined a future in which acequias would need protection or would need to be recognized and respected as valuable to the state.

78 years later, the picture was quite different.  The state’s population had almost quintupled from 330,000 in 1910 to 1.5 million in 1990, and one-third of those people lived in the Albuquerque area, which had seen its acequias largely absorbed into the MRGCD.  A similar process took place in Lower Rio Grande with the Elephant Butte Irrigation District. The San Juan-Chama Project was completed. These were three examples where the state had put its resources into large, expensive water projects, and had put its faith in the State Engineer to develop them. The State Engineer in turn required that water rights be more exactly quantified, and so a dozen stream adjudication suits were filed, and all of a sudden thousands of acequia parciantes were defendants in state-initiated lawsuits, and the validity of many long-held water rights were questioned.  Quantifying water rights in turn led to water rights being analyzed outside of the context of the community and the acequia that gave rise to those rights. Proposals were made to transfer acequia water rights to distant areas, without regard for the effects on the community that would lose those rights. This marked a change, where water was being treated as a commodity, rather than as an essential and integral part of rural agricultural communities. Some people began advocating – to address the issue of getting water rights where they were needed for development, industry, or municipalities – that a New Mexico-wide water market run by the state be established. The assumption in this idea was that water rights would be moved out of agriculture to whoever or wherever offered the most money.

Acequias were getting lost in this new way of thinking.  They were becoming invisible outside of their local communities, their needs neglected.

This extremity of position was one that would spur NMAA to place a great emphasis on policy work as one way of addressing the loss of acequia self-determination and prominence. Through its Concilio, Policy Working Groups, and Congreso de las Acequias (a federation of regional acequia associations), the organization has engaged grassroots leadership to assist in identifying and addressing their most pressing concerns. NMAA has worked at the local, state and federal levels to create policies that address those concerns. After 30 years it can truly be said that NMAA has made acequias visible once again.

Some examples of NMAA’s work influencing decision-makers include:

Reflecting on how this was accomplished:

In the movies, great popular movements and political change happen as if by magic – the lead character makes a speech and the world changes!  In reality, this type of progress is never made simply because you are on the side of what is right. Good ideas are almost always met with resistance, and overcoming that resistance takes a tremendous amount of effort and organizing. The gains that acequias have won over these past 30 years happened because, fortunately, acequias had several key ingredients for success:

The policy achievements listed here are a mere sampling of NMAA’s work. While acequias have made great strides working together, continued advocacy is vital for us not to lose the ground we have gained. Economic interests are still driving many decisions concerning water, new issues are constantly emerging, and changes long in the making such as demographic shifts, a move away from an ag-based economy and climate change, to name just a few, must be reckoned with. Through it all, NMAA is committed to being a platform that offers acequias a voice, to share our visions for policy change and to advocate together.