The New Mexico Acequia Association is preparing recommendations to submit to the Citizen’s Redistricting Committee. The Committee was established by the State Legislature as a non-partisan body charged with developing redistricting maps. Upon completion of the Committee’s work, the State Legislature will have a special session in November 2021 to approve the new district maps.

Redistricting takes place every ten years following the decennial census. The US Census Bureau released updated population data from the 2020 Census a few days ago. The Citizen’s Redistricting Committee is completing a round of public input and has an online portal that allows members of the public to submit written testimony and maps.

Acequias as Communities of Interest

The NMAA will focus on the importance of acequias as “communities of interest” and will be proposing draft maps for legislative districts that are considerate of acequias. For those areas of the state that have acequias, legislative district boundaries should be considerate of the need for acequias to have a political voice. These are some general principles that NMAA supports:

While detailed work is still needed to develop specific maps, the NMAA is making one key recommendation, that the 3rd Congressional district remain a district that represents northern New Mexico. While acequias are located statewide, the vast majority of them are located in the 3rd Congressional district which fosters conditions in which acequias can have political representation that is responsive to their interests.

The Committee is taking public input through meetings and the online portal. Based on that input, the Committee will be developing draft maps for public review by late September or early October, when another round of public input will be conducted. The NMAA is giving verbal public comment at the public meetings and is in the process of preparing maps for submission to the committee. One piece of data that is being used to draw maps is an  that shows most of the major locations of acequias in New Mexico, which is used to determine representation in the Congreso de las Acequias, the governing body of the NMAA. The map is below: 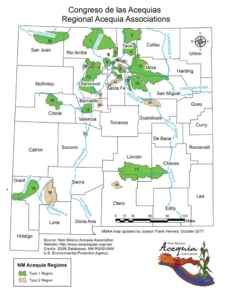