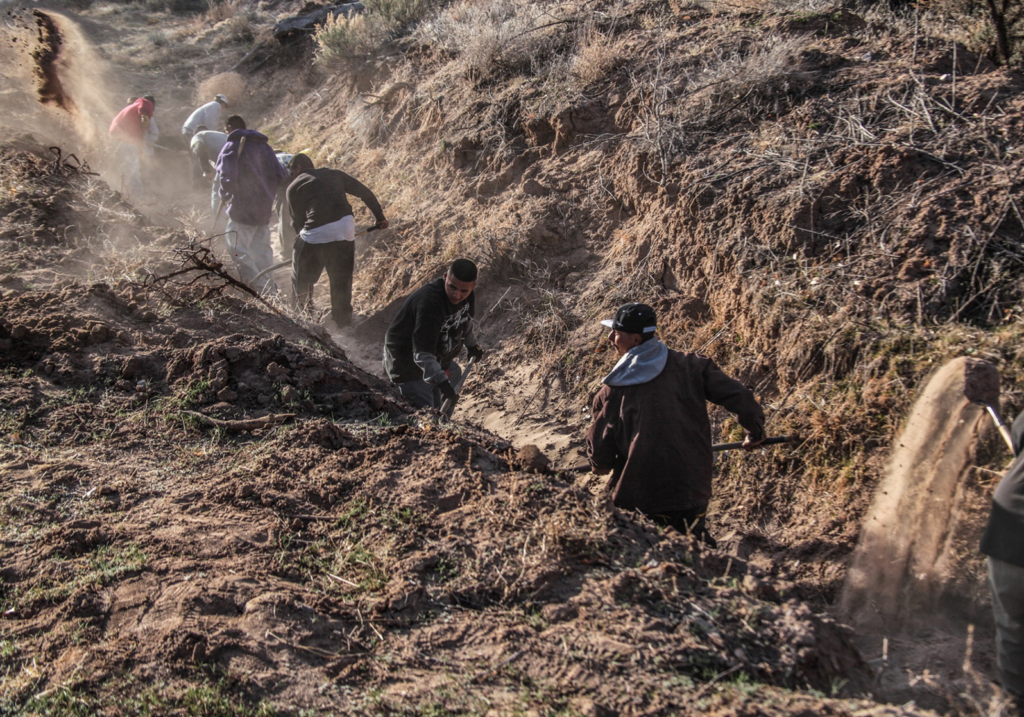 The year 2021 started with a dismal outlook for Spring runoff. A light year of snowpack promised little in the way of snowmelt and acequias braced for a very dry irrigation year. In May, the US Drought Monitor showed that 99.37% of New Mexico was in severe drought to exceptional drought. With tempered expectations, acequia leaders prepared for a difficult irrigation season. In some communities, the low runoff prompted acequias to initiate water sharing agreements between acequias. Many individual farmers and ranchers adjusted their operations to account for a season with limited irrigation.

Almost as an answer to many prayers, monsoon rains started in the early summer. These monsoon rains are credited with protecting us from a potentially catastrophic wildfire season and the worst impacts of drought. In the short term, the monsoon rains enabled many acequia parciantes to have a hay crop, grow their gardens, sustain their orchards, and breathe a sigh of relief to make it through another growing season.

During this time, NMAA was able to convene some important discussions about the future of acequias that will be impacted by ongoing drought, uncertain precipitation, and extreme weather events, all of which are related to climate change. One gathering focused on ‘Acequias and Megadrought’, and included dialogue between different  acequia leaders regarding both historic and current practices of water sharing in their communities.

Drought affects the supply of wet water that is available in any given year or over a period of time. Because acequias depend on surface water, they are uniquely vulnerable to changes in snowmelt and runoff. Centuries of variable water supplies from year to year have resulted in a certain degree of resilience to drought because acequias have engaged in customs and traditions of water sharing, also known as the repartimiento. A recent study by NMSU notes that the “acequia footprint” illustrates acequia resiliency to highly variable water supplies because individual parciantes and the acequia collective will irrigate more land during times of high water flow and less land when there is less water. In other words, the extent of land that is irrigated expands or contracts based on the supply of wet water in any given year.

In several communities, acequias are tenacious about sharing scarce water, creating rotations and shorter cycles with ever smaller allocations of water until the water dries completely. The question we face about climate change is the extent to which acequias maintain viability through water sharing, and at what point should communities expect and plan for dry rivers with no water. In a survey in 2020 of about 20 leaders who are instrumental in water sharing agreements, some described their traditions in detail and noted that they managed to get through the year with shared sacrifices. A few had more dire reports, including testimonials that “there was no water to share.”

At the gathering on Megadrought and Acequias, there were two panels that were featured. One was the Mayordomo panel which featured local mayordomos and commissioners and their testimonials about the specific methods of water sharing in their communities. The following three narratives summarize their local acequia customs.

Don shared the importance of the Mayordomo having an intimate knowledge of the acequia, which he established by growing up along the Llano. He described their method of sharing the water by dividing the ditch into three sections, and irrigating only one section per day (depending on how water is released from the Santa Cruz dam). He emphasized the value of regular communication and Commission meetings, walking the acequia, and checking headgates and resolving maintenance issues. On this ditch, everyone has to call the Mayordomo to get water. His acequia first prioritizes water for gardens, pastures, orchards, and then lawns and landscaping in times of shortage. “We are telling people ‘just use what you need’, and urging the importance of everyone getting some water.”

Don reflected that our limited water supply is “the new normal” and considered how his ancestors had found a way to ensure every irrigator had water to survive. He listed a number of challenges they face in the management of the water, including newcomers who have a legalistic view of the system and do not understand that their paper water right does not translate to a full wet water irrigation; encroachment from the City of Española; and developments in the foothills above the acequia that do not have a drainage system and contaminate the ditch with run off. Finally, Don emphasized the importance of regional water sharing among acequias that was facilitated by the Santa Cruz Irrigation District during the Spring, and their ability to work together in a peaceful way during times of hardship.

“My responsibility is to make sure that the water is circulated in the valley – we handle it upon demand,” remarked Phil Villareal, Mayordomo on Acequia de los Chupaderos. Phil described that the determination of how much water parciantes get is based on what is available in the river and the demands from the other parciantes. He noted that not all of the parciantes are actively engaged in the acequia, though they encourage everyone to irrigate. Their Acequia is impacted by the Aamodt adjudication and they have to submit reports every Spring, “showing who is using it and [we] have to account for every drop that goes through our metering system…it is getting very legalistic.”

Sylvia Villareal, Phil’s wife and an acequia commissioner, noted that an additional challenge they face are newcomers who do not understand the practice of water sharing and being fair to all in the community, and are creating gardens that are larger than can be supported by the meager water supply. Remarking on the demands, Phil said, “it is hard to keep everyone happy.” A victory for this team has been working to revitalize the acequias in their area, including breaking ground to create infrastructure repairs for which they have received state funding. They noted that the impetus to do the work was the Aamodt adjudication process and the need for better irrigation efficiency. They concluded by acknowledging that this has been a hard year, including being separated from one another [by covid], but that many lessons have been learned.

Harold explained that there are two acequias sharing water from Morphy lake on a 40/60 basis. The two Presidents of the Acequias maintain control of the outlet gate and they have to be very careful how much they open the headgate, as “we have a very tight schedule”. If the headgate is opened too wide they will rapidly drain the lake, and thus not be able to make it through the irrigation season. He summarized that the challenge for Mayordomos is when everyone wants to irrigate and there is a shortage of water. The two Acequias have always been a joint operation and have managed the water successfully. Issues have arisen when parciantes pressure their Mayorodomo for more water, which is why the headgate is controlled by the commission Presidents while the Mayordomo focuses on allocating the available water.

Harold also shared the story of how Morphy lake was built by local families starting in the 1880s, building up the embankments until 1940. “It took the cooperation of the community for all those years – it was a long term commitment.” The Acequias also lease Morphy Lake water to Fish and Wildlife, which gives them an annual revenue. He reminded us of the value of foresight, collaboration, and the hard work of the ancestors who came before us.

The Mayordomo panel illustrated that water sharing involves not only the mayordomo but also the commissioners in terms of defining the method of sharing and priorities for irrigation. In all cases, water sharing was deeply steeped in history and long-standing customs that have endured in their respective acequias.

While history is a guide for local acequias, new challenges include ongoing drought conditions, newcomers who are not accustomed to living with water scarcity, and new institutional requirements related to water administration by the state, as in the case of Aamodt. It is clear that acequia mayordomos and commissioners have important roles that are rooted in ancient customs, but they also need to be prepared to deal with modern and unprecedented challenges. Acequias face many uncertainties, including not knowing from year to year whether there will be adequate water to irrigate their pastures or gardens. This is a story that continues to unfold and we will continue to learn as our communities work to adapt and survive.