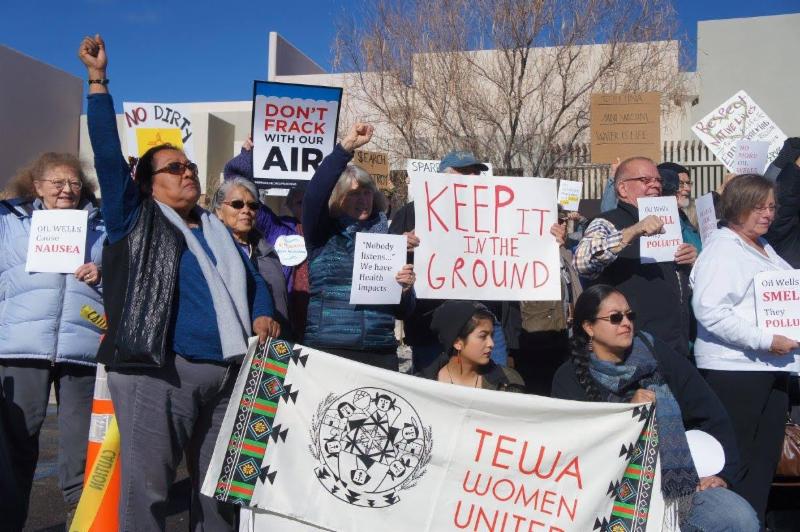 Marian Naranjo is founder and director of Honor Our Pueblo Existence and Beata Tsosie-Pena works with Tewa Women United's Environmental Health and Justice Program, both organizations are members of the Communities for Clean Water Coalition. Kayleigh Warren and Marissa Naranjo are youth activists and leaders from Santa Clara Pueblo.

For the scientific and archaeological communities, the Greater Chaco Area exists in a cloud of wonder and mystery. It is the epicenter of ancestral southwestern culture- a desolate place, where the desert sun beats down on scattered ruins. The area is reminiscent of all that once was, of a time long past but not forgotten. For the descendants of those who built and inhabited the Greater Chaco Area, the land is alive as ever. For us, it is a spiritual sanctuary, a direct connection point to our history, and the teachings of our ancestors. The Native world has been consumed by the United States of America, the biggest consumer country in the world, whose sustainment rests in the cheap availability of resources like oil and gas. This rich area in the southwest has been designated as a “national sacrifice zone”, and since then, the Four Corners region and Her peoples have been suffering from the impacts of oil, gas, uranium mining, and mineral extraction operations. It is a matter of environmental justice that the health of indigenous Peoples, our cultural and spiritual life ways are not secondary any longer, and that the “sacrifice” comes to an end.

The Bureau of Land Management has been auctioning public lands to oil and gas companies at an irresponsible and rampant rate. In recent years, there has been a revolving door of corrupt officials expediting the industries’ access to public lands, which is expected to intensify under the agenda of the new federal administration. Fracking oil and gas wells in the San Juan Basin and in Rio Arriba county number in the tens of thousands, each of those individual wells is a threat to our watersheds and land-based existence. Recent developments in horizontal drilling has changed the game in the energy industry and is creating toxic reservoirs and countless, largely unregulated wells in its aftermath. The amount of water that each well uses is over 5 million gallons per well and is mixed with a toxic chemical mixture injected into the ground. This “fracking fluid” has been known to contaminate groundwater sources and the radioactive “fluid flow back” stored in above ground pits.

There is great concern in the encroachment of these fracking wells in the greater Chaco region, an area outside the boundaries of the national park. Chaco is a designated UNESCO world heritage site, and according to the San Juan Citizens Alliance, 91% of northwest New Mexico’s lands have already been auctioned off, with the remaining 9% in danger of being soon to follow in the greater Chaco region. According to the San Juan Citizens Alliance, there are over 18,000 oil and gas wells in northern New Mexico with 1 well inspector per 4,285 wells in that area. The BLM continues to lease our public lands without having completed an analysis of the cumulative impacts to the social, environmental, and cultural health of not only our Native brothers and sisters, but of all affected demographics.

The ethics of BLM and corporate operations come into question when considering the indifferent ways that these companies oftentimes obtain what they label as “consent” from the indigenous people nearby their operations, and those for whom the land is sacred. Article 32 of the United Nations Declaration on the Rights of Indigenous Peoples defines the human right for tribes to receive consultation from corporations who wish to begin extractive operations on sacred or tribal land, and for said projects not to happen without obtaining free, prior and informed consent from the tribes. Article 32 also describes the inherent responsibility for corporations to do their utmost to minimize the cultural and environmental impact their operations will cause. Free, prior and informed consent is an internationally accepted principle that recognizes Indigenous peoples’ inherent and prior rights to their lands and resources, and respects their legitimate authority to require that third parties enter into an equal and respectful relationship with them, based on the principle of informed consent. In the current interactions between oil & gas corporations and tribes, the required consultations are purposely feeble. Scoping meetings are only held for the people in surrounding areas, not for those who may live further away. The scoping meetings that are held have been known to be closed to public comment, and to lack the presence of an interpreter, in areas where many residents speak only Navajo. Consultation with tribes is an inconvenience, and what effort is put forth is purely to “check a box”, so to speak.

These are some of the topics we explored in our Pueblo Gathering for the Protection of Greater Chaco; an educational and community dialogue hosted by Tewa Women United and Honor our Pueblo Existence in January of last year. At this meeting we discussed our intimate ties as Pueblo ancestors to the tribal historic cultural sites of the Greater Chaco area, and our responsibility in its continued protection. For the oil and gas industry, sites like Chaco Canyon are merely figments of the past- ruins, abandoned places deemed as collateral as they drain the Four Corners Area of Her rich resources. But for the entrusted caretakers of these places, this land breathes with us. The San Juan Basin and the Greater Chaco Area are living sites- more than that, they are sacred origin places for all Southwestern indigenous people. In that fertile desert, we see the footprints of our ancestors. In the breeze that reverberates off the cliff sides, we hear their voices. This land is our pharmacy, our grocery store, our classroom, our church, and gives us a sense of sacred orientation in this vast existence. Although we are constantly healing through generations of historical trauma, we are empowered by our core values as Pueblo people to defend our living history and revitalize the health and well-being of our communities now and for generations into the future

According to the Santa Fe New Mexican on January 25th:

Despite protests from Native Americans, environmentalists and others, the U.S. Bureau of Land Management on Wednesday auctioned oil and gas drilling rights to 843 acres in the Chaco Canyon region of northwest New Mexico. The rights sold for $3 million, according to the BLM.